I’ve always wanted to make rich, expressive terminal-user-interface applications such as htop, vim, or tmux but felt deterred by the absurd amount of state that needs to be maintained even for the simplest of visual effects.

Earlier this year someone posted a link to https://github.com/denisidoro/floki and it totally blew my mind! It’s a JSON browser written in ClojureScript using Reframe, Reagent, React, and Blessed with graphical windows and keyboard navigation. I had no idea blessed even existed! I knew I had to make a template out of Denis’ stack so others like myself can quickly make our own awesome terminal user interface applications.

The project can be found at:

This is the first question most people will likely ask upon discovering this project. At this time however, I no longer believe in “best-tool-for-the-job”. It’s such a personal, relative, and temporary measure so I would rather not incite a language war trying to suggest how ClojureScript could be objectively better than any other language. Instead it’s currently the language I enjoy the most. Its ethos gels with mine and I enjoy the development process it overs and I hope this project inspires curiosity to give it a shot. That said I will share my reasons for enjoying it so much.

Functional programming provides strong principles that guide all implementation decisions. In most cases I’ve found it helps me make more reusable, simpler, and concise units of code I can compose together to make more complex systems. Because of the simpler pieces I find it’s much easier to test, write, document, maintain, and debug.

Clojure’s syntax is very different than traditional c-family languages since it’s in the LISP family. It was very jarring to me when I first encountered it, but I love it now. I will one day write an entire article about Clojure syntax but what in short it’s very consistent. There’s very few pieces to it and no operator precedence to memorize, forms have a strong visual structure to them I find easy to scan and can be edited quickly as structured data with simple keystrokes in well-suited editors.

I understand the value strong, static typing brings, but I personally prefer focusing my attention on getting an app to work versus writing specifications to prove that my program could work. ClojureScript makes JS a bit closer to a strongly typed, dynamic language which I feel offers a lot of flexibility but also more certainty than the loose, dynamic typing found in vanilla JS.

Develop faster using the ClojureScript REPL to send code straight from your editor to the app while preserving the runtime app state. It would be great to see a stronger REPL experience make its way into JS.

Since learning Clojure I spend far less time reading docs, and more time glancing at source code to solve my problems to get cooking faster. That’s not to say good documentation isn’t valuable, in Clojure I don’t often require much of it to make progress compared to my experience in other languages.

Compared to Clojure, ClojureScript startup time is significantly faster running on node. This is important because CLIs or TUIs should fire up quickly.

Poking around Floki’s source demonstrated how the required libs should fit together and how to develop the template with lein-figwheel and lein-cljsbuild. After some trial and error plus many questions in the Clojurians Slack I forged a simple, working prototype.

Just as soon as I moved towards the peak of this mountain I discovered an even larger peak: The creator of lein-figwheel created a successor project, figwheel-main, for building the JS. In addition to better documentation, it provides a more robust configuration strategy, better build performance, a rigid spec to test your configurations, and a project no longer needed the lein-cljsbuild companion plugin. Since I am both naive and foolish, I ambitiously embarked on supporting a figwheel-main option.

Supporting figwheel-main turned into a more arduous task than expected. I’m having trouble pinpointing exactly why. It could be that for lein-figwheel I had a working example from floki to go by, or it could largely be the way the docs are organized. While figwheel-main has a lot more documentation than lein-figwheel it conflates practical guides with reference documentation. One of the initial struggles was having to figure out that your figwheel-main.edn file only configures figwheel tooling behavior while your <build-id>.cljs.edn files are essentially compile options for a specific build. You can override figwheel-main config from a cljs config by adding a meta hash-map to your cljs config map.

For instance the :watch-dirs map overrides figwheel-main.edn options. It makes some sense now but I think a :figwheel key in the cljs.edn files would have been my preference.

Another area where I think figwheel-docs lack is in node development, especially working with npm deps. The floki project uses the :npm-deps and :install-deps config options with lein-figwheel to manage the npm modules automatically. The advantage of this approach is that it automatically handles updating the package.json, installing deps, and allows ns imports, shown below.

While this syntax is preferred, I decided it would probably be better to make the template use package.json for deps so devs can make the most out of what npm offers. However, it turns out you cannot use the ns syntax from manual package.json deps. It only works using the ClojureScript :npm-deps and :install-deps build options. After some slack questions and testing against figwheel’s detailed config spec I found that js interop is the recommended way to use npm modules anyway.

Not quite as nice as the ns syntax but became essential for getting the test runner to work. I just couldn’t get tests to run with ns import syntax even with the :npm-deps and :install-deps build options. I created an issue in figwheel-main to learn more and discuss solutions.

After stumbling my way to a working config with figwheel-main I once again had a running UI. While researching figwheel-main posts I noticed someone usually full-heartedly recommends shadow-cljs. Seeing so many comments like that convinced me it would be worth supporting as well. While it is yet another build tool to learn, this project has been a great excuse to give each cljs build tool a shot. So with a deep sigh I set off to reach the next mountain peak of this project.

Shadow turned out to be amazing. Where as lein-figwheel was a small foothill and figwheel-main like free-climbing a mountain, shadow-cljs felt like walking along a boardwalk at a partially populated pier with a legal open-beverage policy. It’s very well documented and everything really did just work after a minimal amount of reading the docs and a few configuration attempts. It’s a very impressive tool and its attention is very well deserved. If you’re starting a green ClojureScript project I can’t recommend shadow-cljs enough. It even has very solid, official support for nodejs right out of the gate.

The only noticeable caveat is that shadow doesn’t really support separate dev and production source paths like Clojure, lein-figwheel, and figwheel-main do. This template shows a debug box during development and captures log statements on the bottom half of the screen. However, devs wont likely want it there on production builds and I don’t want them to have to modify code to disable it between builds. I was able to work around this limitation by customizing the entry points between dev and production and the docs suggest the unused version will be factored out, but somehow I don’t feel as certain or good about it. I am very glad though that I was able to work around that and still deliver my intended developer experience.

After adding support for shadow I had a decision to make: What should the default build tool be? At first I was leaning towards lein-figwheel as that’s what floki uses and is likely the most familiar to Clojure devs focusing on a project.clj config. Then I moved to figwheel-main due to its improved documentation and performance. Once I got shadow working however, it was clearly the best choice.

Why is Shadow CLJS the default build tool?

One of the more interesting problems I ran into was figuring out how to support dynamic key listeners. In floki there’s only one set of global keyboard events but what would you do if you had different “pages” that responded to different keys?

Using blessed you can set bindings like the following where screen is a blessed Screen instance:

After reading through a bit more of Reagent’s docs I found my solution based on using with-let:

This way the handlers are only created when the view is rendered but are destroyed when the view is removed. This means users can make pretty complex UI without having to juggle extra state to determine which set of key listeners to pay attention to. In the example I’m dispatching a reframe event but you can use local reagent atoms as well if you only want to affect local component state. That’s how the generated vertical menu view works.

Once all the builds were configured it is vital to provide good documentation. I want to ensure people familiar and new to Clojure can dive right in and get something up and running. To begin I first created a mind-map outline and went through several iterations of grouping related items together, removing extraneous topics, and rearranging groups until it felt right. 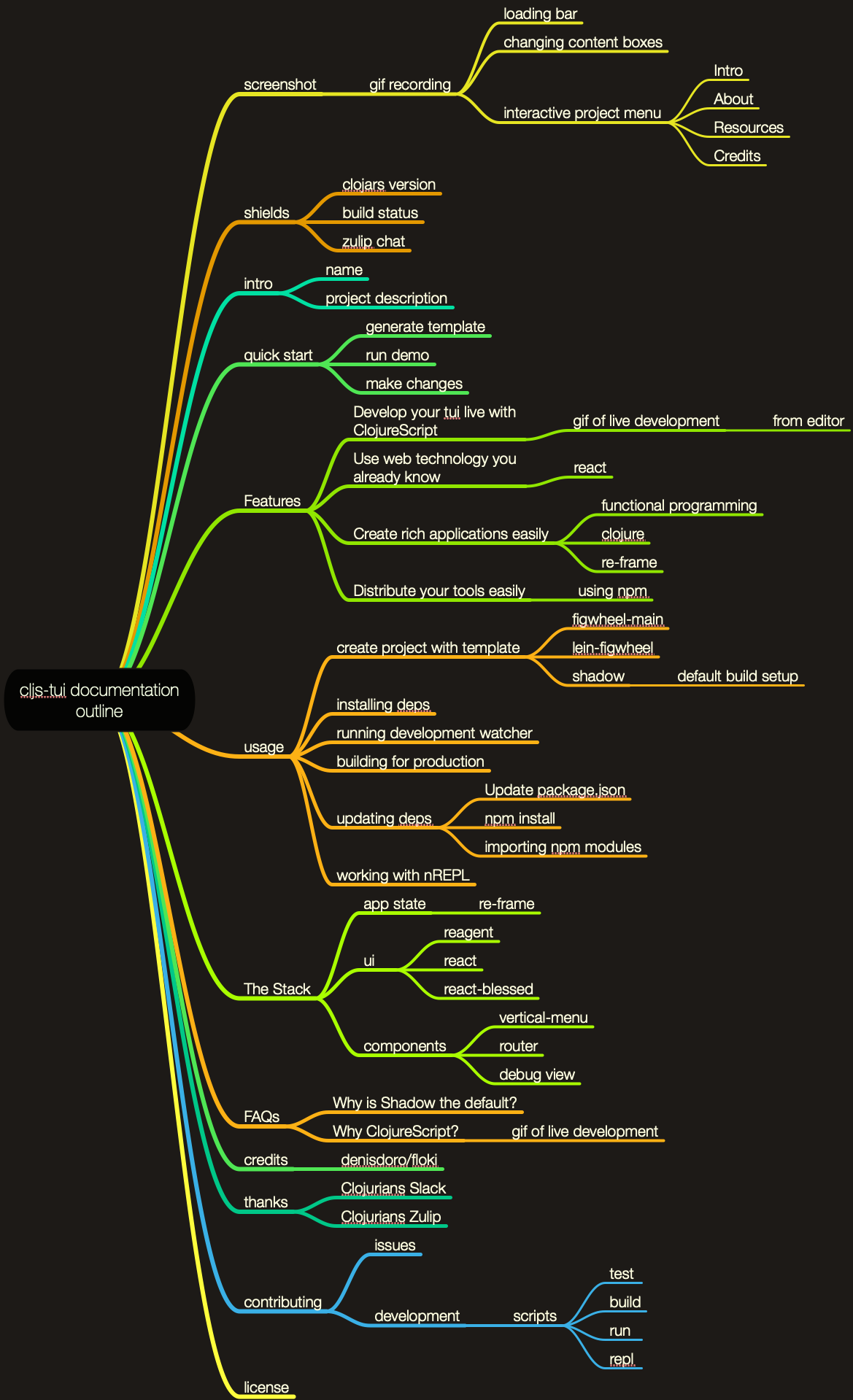 When the mind map felt right I then broke each section or large section of text into separate tasks in my project board. From previous projects, I get diminishing returns trying to crank out a lot of docs at once. By writing it in short bursts over time I was able to refine it to my liking before asking others in the Clojure Slack to review it incase I missed anything. There were many times I would come back to a docs section I wrote the day before and find it very rough, verbose, and meandering so it felt good to be able to catch that before exposing it to the public.

All in all it was a great project to dive into ClojureScript as I had a lot of fun and learned a lot while assembling this project together. What most excites me is what people will build with it once it’s out there, I see a lot of possibilities.